Arrest of underage Ahwazi Arab by the Iranian regime

On Saturday 16th Sep 2017 dust particles in the air in  Ahwaz reached 1,263 micrograms per cubic meter making it 8.42 times the maximum limit.
According to head of the Public Relations of Department of the Environmental Protection Agency of Khuzestan, “at 8:00 A.M saturday morning the amount of dust particles reached 1,263 micrograms in Ahwaz , 244 micrograms in Shushtar and in Dezful 300 micrograms per cubic meter” , while the  normal limit of airborne particles is 150 micrograms per cubic meter.
Ahwazi citizens organised hundreds of protests against the Iranian government’s discriminatory policies and water transfer from Khuzestan province to central areas, and the consequent environmental damages which resulted in drying of  the rivers, wetlands and other surface and subsurface waters.

Official statistics and surveys show that the increase in dust and sandstorm in the country are a result of water transfer projects, and the deliberate drying up of wetlands for the purpose of extracting oil and watering the sugarcane plantations.
Ahwaz Human Rights Organization strongly condemns the hostile environmental policies, water deviation out of the province, drying of the  rivers and wetlands and calls for an end of these harmful practices.
We call on international human rights institutions and environmental organisations to exercise pressure on the Iranian government to stop the destruction of the environment and abide by international codes and standards to protect the environment and the people. 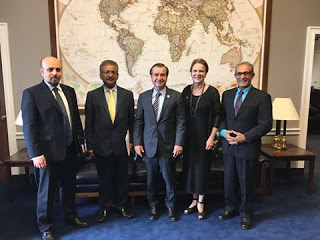